This is Metropolis, home of Clark Kent, home of Superman. Metropolis is named after the 1926 Fritz Lang film Metropolis (a film set in a futuristic urban dystopia). 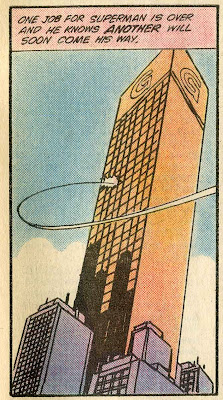 While the city has changed since it's inception, the aura and feel of the place has, for the most part, remained the same.

Superman first appeared in Action Comic #1 in the year 1938 and has been a resident of Metropolis ever since. He has remained an icon of unmatched image and purity, essentially becoming a Christ-like figure from another planet. 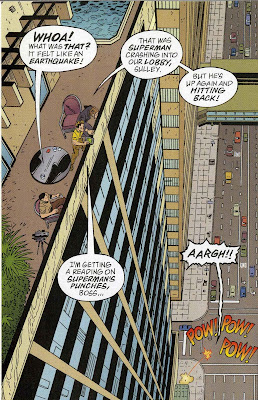 Metropolis is based on a city like Manhattan, although Chicago was said to be its first model. The city is nearly always seen in the daylight. While it is depicted as a word-class city, it also seems to be slightly bland, undefined, and even mundane at times, patiently waiting for something to happen. 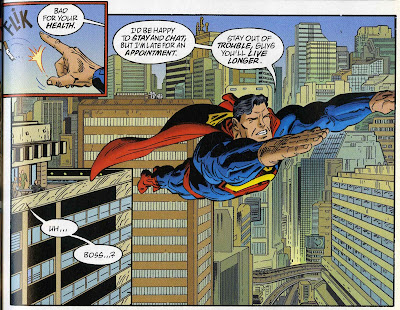 It is shown to be a clean, warm, relatively safe, friendly, and even wealthy. Like New York it has a nickname - The Big Apricot. 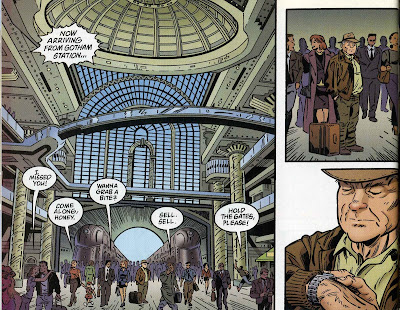 New Troy is the largest borough in Metropolis. Resembling Manhattan, New Troy is a skyscraper island bustling with commerce and business. The concrete and steel canyons of the city rise to dizzying heights. "1930s architecture stretched like a rubber band" as said in the Art of Superman Returns book.

The Daily Planet Building is the most recognizable landmark in the Metropolis skyline. Located in "Planet Square," it is particularly known for the Daily Planet globe atop the building. Other prominent skyscrapers include the Emperor Building (a reference to the Empire State Building), the Newstime Building (home of the national Newstime magazine, an obvious reference to Newsweek and Time) which is secretly owned for several years by Lord Satanus posing as "Colin Thornton", and LexCorp Tower, headquarters for Lex Luthor's company.

Besides the Financial District, notable areas of New Troy include Chinatown, Little Bohemia (the arts capital of Metropolis), and Glenmorgan Square (one of a number of New Troy's counterparts to New York's Times Square).

Famous streets in New Troy include Fifth Avenue, Bessolo Boulevard, and Topaz Lane. The latter two are Metropolis' versions of Broadway in New York City. Bessolo Boulevard's name is derived from Adventures of Superman lead actor George Reeves' middle name. Other Metropolis boulevards in the New Troy borough are similarly named for other actors from that series and from its radio predecessor of the same name(e.g.: Coates, Larson, Collyer, etc.).

In northwestern New Troy is the impoverished and crime-infested neighborhood of Suicide Slum, best known for the 1940s adventures of the Guardian and his street urchin companions, the Newsboy Legion. Although the northwestern location is similar to the relationship of Harlem to midtown Manhattan, the neighborhood bears more physical and cultural resemblance to Manhattan's Lower East Side. The Ace o' Clubs is a bar owned by Bibbo Bibbowski in Suicide Slum.

The now-married Clark Kent and Lois Lane currently live in an apartment in New Troy, at 1938 Sullivan Lane (a tribute to the year Superman first appeared); Clark Kent's traditional apartment address of 344 Clinton St., Apt. #3B, was usually described as being located in midtown Metropolis.

Other boroughs and suburbs:

New Troy is separated from the suburban boroughs by the West River and Hobb's River. Midvale is a suburb of Metropolis, more well-known as the home of Supergirl and the site of the Midvale Orphanage. Bakerline is another borough of Metropolis. Located north of New Troy, Bakerline is the home of newspaper reporter Jimmy Olsen.

The previous paragraph was copied from Superman.wikia.com 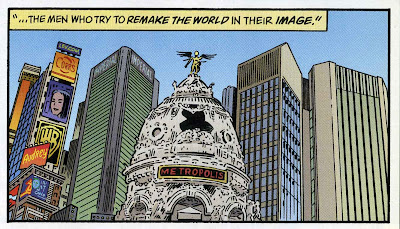 While in the original Superman stories of Siegel and Shuster, Superman is portrayed as an aggressive and rough individual. This came to an end fairly early and since the late 1940's Superman has come to portray a strict moral code based on his mid-western upbringing.

In the rare occurrence that Metropolis is shown at night, it is well illuminated and not a place one would fear. A safe haven if anything. 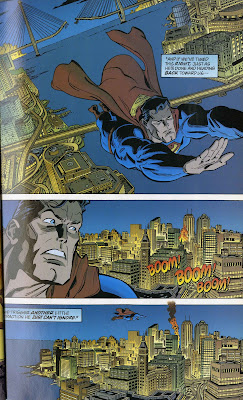 Clark Kent, Superman's alter ego, also has this boysout appeal about him. Described as the "mild-mannered reporter", he comes to symbolize the typical passive introvert. Metropolis starts to become a reflection of it's greatest inhabitant by taking on these personality traits; powerful yet mild-mannered.

Posted by Chris Pritchett at 4:07 AM